Exceedingly rare three-dimensional piece, created in England during the early Victorian period (1837-1901), circa 1850. This gorgeous sculptural brooch, depicts the carved profile in high relief of the mythological portrait of cupid, slightly facing three quarters to the right. It is adorned with a ribbon going from the right shoulder to the middle of the chest (arrow basket holder) and crowned with a detailed wreath of laurels and flowers. The main carving is attached from the back to a flat oval dentilated piece with two invisible pins and fitted with a horizontal hinged pin bar with a security hook lock to wear as a broch.

The carving is exceptional, with great attention to detail, especially in the texture of the hair, the wreaths and the plump expression of the cupid's face. Truly a remarkable work!. 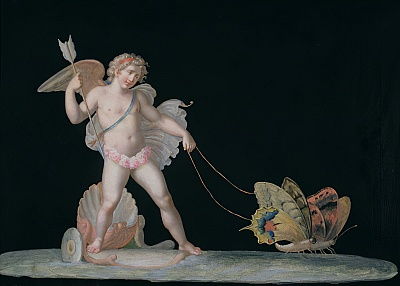 Cupid, is the god of desire, erotic love, attraction and affection in classical mythology, means the passionate desire. He is often portrayed as the son of the love goddess Venus and the god of war Mars. He is also known in Latin as Amor. His Greek counterpart is Eros. Although Eros is generally portrayed as a slender winged youth in Classical Greek art, during the Hellenistic period, he was increasingly portrayed as a chubby boy. During this time, his iconography acquired the bow and arrow that represent his source of power: a person, or even a deity, who is shot by Cupid's arrow is filled with uncontrollable desire. In myths, Cupid is a minor character who serves mostly to set the plot in motion.

Collateral: This piece is  accompanied by a presentation jewelry box.

Condition: The overall condition of this brooch is excellent. Beside the little normal wear, there is no damage to the carving and is secured in the settings. This piece has been carefully inspected to guarantee the condition and authenticity.