An extremely rare and very important piece, created in Paris, France at the atelier of Soyer Et Fils during the art nouveau period, circa 1898-1900.

This fluted baluster shaped vase has been carefully crafted in solid sterling silver organics elements such flowers and 6 glorious peacocks paradise birds. The top and the lower parts are embellished with engravings in high relief and chiseled in lower reliefs with floriated motifs.

The main body is exceptionally decorated, with applications of colors enamels over a guilloche textured surface.

Engraved in the underneath base, with the inventory serial numbers, "2793 AKXVV".

Note: Guilloché is used in fine jewelry to enhance the appearance of brooches, rings and pendants. Guilloché enamel refers to metal pieces that have been given the Guilloché treatment and then covered with a translucent layer of enamel, giving the geometric patterns underneath the enamel a colorful hue.

Note: This piece, is the largest example known from this French maker, documentations accompanied this piece.

Exhibitions: This vase was exhibited at the Paris Universal Exposition in 1900. 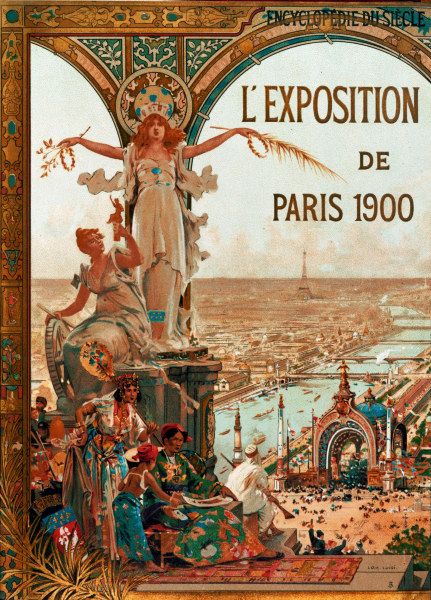 The Exposition Universelle of 1900, better known in English as the 1900 Paris Exposition, was a world's fair held in Paris, France, from 14 April to 12 November 1900, to celebrate the achievements of the past century and to accelerate development into the next. It was held at the esplanade of Les Invalides, the Champ de Mars, the Trocadéro and at the banks of the Seine between them, with an additional section in the Bois de Vincennes, and it was visited by more than 50 million people. Many international congresses and other events were held within the framework of the Exposition, including the 1900 Summer Olympics.

Major structures built for the Exposition include the Grand Palais, the Petit Palais, the Pont Alexandre III, the Gare d'Orsay railroad station (now the Musée d'Orsay) and the entrances of Paris Metro stations by Hector Grimard; all of them remaining today, including two original entrances by Guimard.

Collections: A similar sister piece, with the same dimensions and size is part of the permanent collection of the Kuntsweberbemuseum in Berlin, Germany. Exhibited at the "Werke Um 1900" catalog of the exhibition, plate 31 illustrated. This vase was also exhibited at the Paris Exposition Universelle in 1900 (See Illustrations).

It is in perfect vintage/original condition with the aged patina intact, is not polished. An amazing collector's piece.