Modernist sculptural OP-Art piece, made as a wearable ring by the artist-jeweler, Laura Rivalta.

This ring has been made around the 1980 in Valenza, Italy and constructed in solid yellow gold of 18 karats , with accents of white gold. All elements are carefully assembled piece by piece and are attached together from the back, by a pair of screws.

The design was conceived as one in three dimensions, taking into account the deconstruction of the geometric figure of the circle. It is composed of 6 highly polished and mirrored pieces, two of them are adorned with large semi-circular carvings in the shape of a natural salmon pink coral. the composition creates a three-dimensional optical art effect. 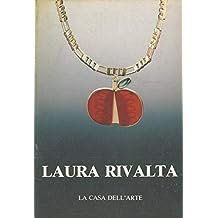 This edition was published by La Casa Dell'Arte and made in a limited series of only 12 pieces, this is the piece number 3.

Laura Rivalta, was formed within the goldsmith tradition of Valenza, the city where it was born in 1933. She attended international courses in engraving technique at the Raffaello Academy in Urbino. In 1972 she began his research which is expressed through works of graphics, sculptures and gold works that he carries out personally.

Laura Rivalta's poetics revolve around the concept of the sacredness of gold. Through gold and stones (semi-precious and hard) the artist symbolically expresses the four elements of nature (earth, water, air, fire). The intent of each form of Laura Rivalta is to make people perceive the hidden music and the pauses of the plasticity of matter: the light penetrates through the transparency of the stone, reflected to be captured within the architectural form of the work according to physical and mathematical laws.

In 1973 she exhibited at the Palazzo dei Diamanti in Ferrara. In 1974 she was invited to "Aurea" (Goldsmith Art Biennial, Palazzo Strozzi, Florence). Two years later she took part in the exhibition “Manifestazioni Orafe Italiane” (San Paolo, Rio de Janeiro, Belo Horizonte, Brasilia). In the same year, at the invitation of the Civic Museums of Vicenza, she presented his golds pieces in the church of San Giacomo. In 1979 he exhibited at the Rizzoli Center in the Galleria Vittorio Emanuele in Milan. In 1981 at the Castello Sforzesco, on the occasion of the exhibition “The Material of the Arts”, he exhibited gold, sculptures and graphics. In 1985 he was again at Palazzo dei Diamanti and in 1986 in Japan (Tokyo, Takanawa, Shibuya) where he exhibited alongside Manzù and Azuma. In 1991 the Municipality of Valenza organized an anthology; in 1996 the Municipality of Argenta invited her to “Life and customs in the dream of an artist's jewel”; in 1998 at the traveling exhibition “Le tre Venezie” (Treviso, Zagreb and Vienna) with the patronage of Foreign Affairs and Unesco; in 2001 at Palazzo Pitti Florence "The art of the artist's jewel from 900 to today"; in 2015 she exhibited in Valenza at Villa Scalcabarozzi "Precious Opera - Masterpieces of art and Valencian goldsmith tradition"; in 2020 she was given the keys to the city of Valenza.

Note: Op art, short for optical art, is a style of visual art that uses optical illusions. Op art works are abstract, with many better known pieces created in black, white or color contrasting. Typically, they give the viewer the impression of movement, hidden images, flashing and vibrating patterns, or of swelling or warping. The antecedents of op art, in terms of graphic and color effects, can be traced back to Neo-impressionism, Cubism, Futurism, Constructivism and Dada. László Moholy-Nagy produced photographic op art and taught the subject in the Bauhaus. One of his lessons consisted of making his students produce holes in cards and then photographing them.

It is in perfect condition, with gorgeous look and is a truly museum piece.