A modern minimalist art-piece of jewelry made in Brazilian by H. Stern. It was crafted, with avant-garde patterns in solid yellow gold of 18 karat, with brushed satin finish.

Stamped with the company star logo and the gold assay hallmarks, "S. 750". 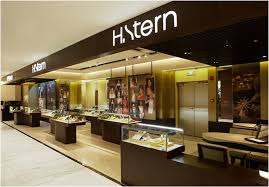 Hans Stern, the company was founded in Brazil by Hans Stern in the 1945. When he was a teenager, he and his family fled Nazi Germany and arrived in Rio de Janeiro, Brazil, penniless. Hans found a job at Cristab, a company that cut and exported gemstones. He loved the colorful semi-precious gems and learned all he could about the jewelry business. He also studied the languages he would need to succeed in the international gem trade. Part of Hans's job was visiting the mines. He became friendly with the miners and learned more about the gemstones from them. He pawned his precious accordion to buy gemstones on the consignment. He was still a young man when he founded his own company, H. Stern, his first shop established on the docks where international passengers disembarked from the cruise ships.

Hans wanted Brazil to be known as the “Land of the Colored Gemstone,” and today, more than half of the colored gems in the world are mined in Brazil. The turning point in his career came when the Nicaraguan dictator, Anastasio Somoza, visited the struggling jeweler's shop and bought a distinctive aquamarine necklace for $20,000. Hans's reputation soared. His creations captured the free-spirited, colorful, creative essence of the Brazil. Now his son Roberto Stern is ruling the worldwide company.