An iconic and popular piece created in Rome, Italy by the jewelry house of Bvlgari, back in the 1970's. This rare Monete bracelet has been crafted, with classic Roman-revival patterns in solid yellow gold of 18 karats, with high polished finish. It is composed by a twisted braided leather straps of 7 mm, with the mounting element holding a genuine ancient Roman coin. It is suited with a double cylindrical push lock.

The coin, is a rare genuine bronze Quadrans or Semis (17 mm) of 4.05 Grams, from the ancient period of the Roman empire, attributed to the Emperor Hadrianus (117-138 AD). It is "attributed" because omits the name and portrait of the emperor. The anonymous types are attributed to the period from Domitian (81-96) through Antoninus Pius (138-160) or possibly as late as Marcus Aurelius.

Obverse description: The bearded portrait bust of Mars in high crested helmet facing to the right in a plain field.

Reverse description: An unidentified Statue (cuirass) Probably the statue of Hadrian, with the letters S C (Senatorum Consultae). at each sides. 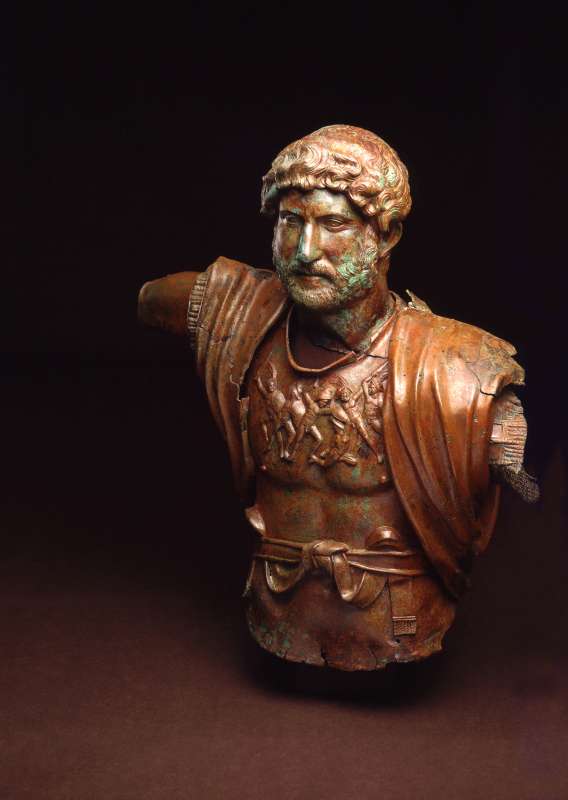 Note: Quadrans (literally meaning "a quarter") or teruncius was a low-value Roman bronze coin worth one quarter of an as. The quadrans was issued from the beginning of cast bronze coins during the Roman Republic with three pellets representing three unciae as a mark of value. In the first and second centuries AD the quadrans was the smallest Roman coin denomination. It was not worth much then, it was not issued in large numbers, and it was not hoarded, so is not common now. The semis was worth two quadrantes (quadrans is singular, quadrantes is plural) and is even less common. Production of both stopped sometime in the middle of the second century, probably because inflation finally made them worth too little.

It is in great condition and the coin is a collectable numismatist interest, with a beautiful portrait in high relief, well centered strike and with great patina.